German-born business woman Corinne Hofmann, 45, gave up everything to live with a Masai-Samburu warrior in the Kenyan bush who did not speak her language. She tells REAL's Louise Hall of their fight for love and survival against the odds.

"In December 1986, when I was 28, my world as I knew it changed forever. A freak storm flooded my wedding shop in Biel, Switzerland, causing damage that would take two weeks to repair, so I went to book a holiday; I just needed to get away. My boyfriend of five years, Marco, 26, and I didn’t mind where we went but it had to be hot. I walked out with two tickets to Mombasa, Kenya – not knowing how it would change my life.

It was on the Likoni ferry in Mombasa, two days into our holiday that I glimpsed my first Masai. 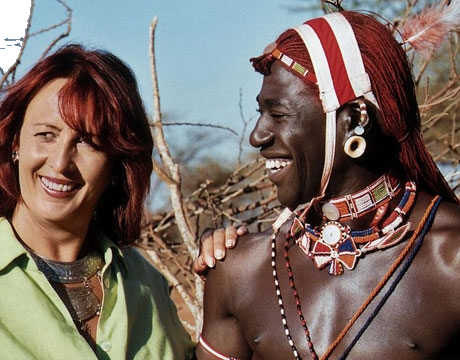 I was watching the sun setting when Marco said, ‘Corinne, look, there’s a Masai!’ On the quayside among the crates and chickens, stood a tall, dark, exotic man – his lithe body adorned with ethnic jewellery and a small red loin cloth. He was most the most beautiful man I’d ever seen.

"In that moment my life changed forever. It was as if I had been struck by lightning; it was love at first sight."

In that moment my life changed forever. It was as if I had been struck by lightning; it was love at first sight. I was bewitched. When the ferry docked, he was swept away in the crowds. Thinking I’d never see him again, I wanted to cry. Tired and weary, Marco and I missed our bus. Then a voice behind us said, ‘Hello, can I help you?’ It was ‘my’ Masai – Lketinga Leparmorijo, who I later learnt had never spoken to a white person before! He took us back to our hotel.

For the next few days I was entranced. Preoccupied. I couldn’t eat or sleep. My whole life had been turned upside down. Two days later, we saw him again at local nightspot, the Bush Baby Disco. He joined us at our table and we tried to talk. His very basic English forced us to communicate through signs and gestures, but strange and alien as he was, he attracted me like a magnet. Marco didn’t want to dance, so Lketinga and I took to the floor.

That night I couldn’t sleep. Marco and I had enjoyed great fun together but I realised that my feelings for him had evaporated – along with all thoughts of my life back home. I told Marco that it was over between us, saying, ‘I want to stay in this mesmerising country with my Masai!’ Of course, he tried to talk me out of it and thought that I was mad!

The next day, we saw Lketinga again and visited his house – a small hut just over a mile into the bush. We met his friend Priscilla, a Masai woman. She spoke English and explained that Lketinga had only arrived in Mombasa the previous month, accounting for his pidgin English. He had come to the coast for the season, just to earn money dancing for tourists. Lketinga and I could only talk in smiles but, slowly, we got to know each other. Somehow, I got the message across that I would return – alone. He seemed pleased when I told him how I was feeling.

In July 1987, after the longest six months of my life, I returned to Mombasa with my brother, Eric, and his partner. As he’d promised by letter, Lketinga was happily waiting for me. But Eric was visibly shocked at the sight of him. I realised that my obsession with Lketinga was mine and mine alone.

That night, as we danced, his eyes were wild with astonishment and excitement. The next day, I moved out of the hotel into his hut; where we had our first sexual contact. I learnt that Masai don’t kiss – the mouth is only for eating – and that sex is not so important in their culture. Lketinga had been circumcised, so making love was painful for him and it was over quickly. But all that mattered was being together.

We tried, in vain, to get Lketinga a passport. In the end I left £400 with a travel agent to sort it out for him, and I flew home, vowing to return by October. Lketinga asked, ‘How long is three months?’ I said, ‘Three full moons!’

In Biel, I sold everything: my apartment, my business and my Alfa Romeo Spider. The wholesaler I used for my shop gave me my favourite wedding dress, just in case Lketinga and I married. The following September, when I flew back to Kenya, my first shock lay in store: Lketinga wasn’t there any more.

I immediately went to find Priscilla, and she explained that he hadn’t received my letters and had been taunted by jealous contemporaries who’d said, ‘You are crazy to think this white woman will return.’ He had fled to his family home near Maralal – nearly 800 miles away. Thankfully, the money was still with the travel agent; confirming my belief that Lketinga was a good man. I knew I had to find him.

By bus, it took 36 hours to reach Maralal. Not finding him would have been unbearable but I also knew that I couldn’t search forever, so I gave myself ten days. I showed a photo of Lketinga to everyone I met. Some laughed, some didn’t understand but nobody recognised him – until the last day when a boy told me he lived in Barsaloi, a dangerous seven-hour walk away through thick jungle, with elephant and buffalo.

I rented a car and went to find Lketinga. After a bumpy, treacherous three-hour drive we arrived at the ‘manyatta’ (hut). It was around 1m 40cm tall, 3.5m long and 2.5m wide. My heart was pounding as I crawled inside. It was dark, with cow skin on the floor and a fire. At first I couldn’t see anything. Then, when my eyes gradually adjusted to the dark, I saw him and he said, ‘Now I really believe you love me’.

He asked me to be his wife, and I accepted. As a Samburu-wife I couldn’t expect running water, electricity or a toilet and our bed would be the floor, but I told him, ‘Wherever Lketinga lives, I live too!’ His mother, decorated in pearls, with a shaven head and huge naked breasts, gave me her blessing. Soon, an enormous crowd gathered. That night I slept badly, tossing and turning on the hard earth floor but, with time, I grew accustomed to my strange new life.

Life was extremely basic; a hand-to-mouth existence in this half-bush, half-desert terrain. We mostly ate cooked meat and the women were dependent on the men – the hunter-gatherers. Sometimes we went without food for two days or Lketinga went hunting for days on end. I could get used to sleeping on the floor and our difficulty communicating but I struggled with the lack of food.

I took anti-malarial tablets but drank water from the river. On a trip to stock up on supplies for our wedding, I fell ill and came round in a hospital in Maralal with a high fever. My head was spinning, my whole body ached and I was dripping with sweat. Lketinga had been by my side all night.

We arrived at our wedding, having missed two of the three-day festivities. It was their first white/black Masai marriage so to mark the occasion, goats had been slaughtered, 40kg of meat had been cooked and 300 litres of tea made. Hundreds of people came. Lketinga’s fellow warriors presented him with jewellery and decorated him with paint. Later, a special ox was slaughtered and its blood drunk. Everybody was laughing because, in the middle of all this, I was dancing in a white wedding dress. For me, it was symbolic of Switzerland – and my own ‘white’ wedding! I was so happy. I had the best of both worlds. Fortunately, Lketinga was happy for me not to follow the Samburu tradition of female circumcision.

After we married, Lketinga and I opened a local shop, selling basic supplies and food which we brought by Land Rover from Maralal. I didn’t want anyone to go without food again.

I fell pregnant quite soon after the wedding, but I kept getting ill. I had malaria three times during my pregnancy and I was terribly thin and weak. I was afraid for the health of my unborn child, and decided to return to Switzerland. My mother was shocked at the sight of me. I had lost nearly 5st, and weighed just 7st 8lbs.

THE BEGINNING OF THE END

I returned to Africa to give birth to my baby daughter Napirai, now 14 – Lketinga’s most special gift to me. But when I returned to Barsaloi, our finances were a mess. Our shop was empty because Lketinga had given everything away. Then I fell ill again, first with Hepatitis, then with scabies. By January 1990, I’d had enough. I felt that if we didn’t leave then I would lose either my life, my child or my money.

We moved back to Mombasa – where we’d first met – and set up a tourist shop. Masai aren’t meant to drink alcohol but Lketinga started drinking heavily, stealing money from the till and getting madly jealous if I talked to other men. He became verbally aggressive; it was horrible to see how much he had changed. Eventually, we agreed to go our separate ways. I left him with our fully-stocked shop, our car, our credit cards – about £20,000 – and returned to Switzerland with Napirai to rebuild our lives.

At home, small things were wonderful – like salad and vegetables. But it took a while for me to regain my weight and my personality. Then, one summer evening, five years after I’d left Kenya, I started to write. I wrote for eight months. I was crying uncontrollably but it was healthy. It was therapy. Afterwards, it felt like a great weight had been lifted off my shoulders; the old Corinne was back.

Fourteen years on, I live with Naparai on Lake Lugano in Switzerland. I dream of falling in love again and opening an African-style hotel. I’ve gained so much strength from the experience, and I know that if I can survive in the bush, I can survive anywhere.

Last year, I returned to see Lketinga. He has lost all his money and lives in a small barrack with a roof. He is well and was so happy to see me. Our romance is over but I respect him and still feel close to him. He has two wives, both local women; aged 16 and 25. Neither really know nor love him. Lketinga is an old man now but he is still striking. I am close with his mother and I still support him, his family and the local school. It’s wonderful to know that I’ve helped these people, and when Naparai is older, I will introduce her African family."

Source The Times/A.C Hollis The Masai Published in REAL (UK's best-selling fortnightly), where Louise was a Senior Staff Writer / Acting Deputy Editor. Louise was awarded with the PTC New Journalist of the Year (runner-up) for her work here.

Just as it happened in real life, the film captures their love struck moment.

It is an astonishing story of love at first sight across cultural divides, and their subsequent journey.